How Does The Eye Work

We need the light to be able to see what is around us of things that can be perceived with the naked eye, as well as to recognize colors. Valdu bounce of the things you look at it which in turn reflect different amounts of light that we see different colors. The eye is composed of three main sections, namely:


Front of the eye:

Which fall the rays of light on the front of the eye through the cornea and lens Alchweftin, it is very important that all of the cornea and lens Chweftin because it allows light to pass directly through the front of the eye to the retina, function of the cornea and the lens is in that they have taken the light to focus on the retina in back of the eye and this gives us a clear picture of things-minute video. The aim the light toward the cornea, retina, and adjust the lens focus the path of visible light. The tears they form a protective shield against dust and dirt, so there are in front of the eye, and the tears also help to direct the path of light entering our eyes. And the iris, (the colored circle in front of the eye) is responsible for the change in pupil size, which allows access to different amounts of light inside the eye. Finally, include front of the eye to the pupil, a hole is dark, which is located in the middle of the colored part of the eye: Vbiq pupil in bright light to allow access to a small amount of light, and expands in the dark to allow the entry of more of the light that helps us to see things.

Center of the eye is filled with gelatinous substance called the vitreous body, where the glass is transparent to allow light to pass directly from the front of the eye to the rear.


Back of the eye:

Lies the retina in the back of the eye which is a layer sensitive to light is composed of cells of cylindrical cells and cone, works of these cells to collect signals of light against it to send signals DC to the optic nerve in the back of the eye, concentrated cells are cylindrical around the edge of the retina is that helps us to see things that does not lie directly ahead of us, including giving us an initial idea of ​​what is around us, and are therefore responsible for our help in the movement, and stop things before the collision, as it enables us to see things in dim light and enable us to see the movement of objects. The cone cells, they are concentrated at the center of the retina where the concentration of light by the cornea and the lens is called the region the name of the spot, and give us the cones of vision detailed that we use while reading, watching TV, sewing and looking at the faces of people, it is also responsible for most of our perception of colors. The last thing there is in the back of the eye is the optic nerve, which consists of thousands of nerve fibers, these fibers that pass electrical signals to the brain where it is analyzed to the picture you look at it.

Vision can be likened to the process of capturing images on film using a camera, in this example are similar to the retina film camera which records an image and then look at it, the image-oriented network is sent to the brain where they are analyzed, such as a film camera completely. Thus, we actually "see" things through the brain by the amount of light sent to it from the eye is no doubt that this whole process is very fast so that everything we see and clear. 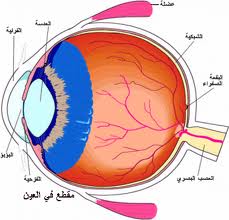 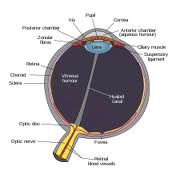